Posted by jenn on November 3, 2014 in Family Activities
This week: Be Silent!

We think even a foolish person is wise if he keeps silent. We think he understands what is right if he controls his tongue.  -Proverbs 17:28

I like the way Mark Twain (or Abraham Lincoln, the attribution is debatable) is credited for describing Proverbs 17:28 this way: “It’s better to remain silent and be thought a fool, than to speak out and remove all doubt.” 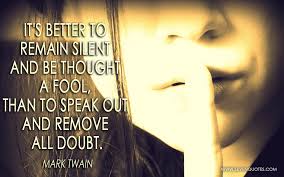 There is so much wisdom in keeping silent. Do you ever re-think a conversation, wishing you could claw back that thoughtless comment. It takes work to control our tongue. It is a serious flaw: The more we speak, our chance of pronouncing damaging remarks greatly increases. The more we speak, the more trouble and drama we’ll heap on ourselves. Fact.

The words of our mouth can trap us – Proverbs 6:2

So in conclusion, the more we keep quiet, the smarter we’ll appear!
To help us remember to keep our mouths closed, we’ll play Chubby Bunny. The trick to this game is to see how many marshmallows we can ft in our mouth and still close it enough to properly say “Chubby Bunny”. Obviously, use caution when asking young children to stuff their mouths to overflowing 🙂  Maybe use small marshmallows for young children, but middle school on up to adult can play using large marshmallows.Count on using at least four large marshmallows for each player. The rules are: no swallowing, no spitting, no chewing, no drooling. The toughest part is actually the drool, in my humble opinion. Keep going around and having each player add one more marshmallow and clearly speaking “Chubby Bunny”. When all players but one have been disqualified, you’ll have your Chubby Bunny Champion!
Finish off with a quick family prayer. God cares about every area of our lives; let’s encourage the children to pray about whatever is on their hearts. Add to your prayer journal weekly, and be sure to leave space to jot down a quick note when God answers the prayer. Your kids will grow stronger in their faith when they can look back and see what the Lord has done.How did this family night work for you? Did you adapt it to fit your family?